Mea Culpa! No, i have not been on vacation, no, i have not died, no, my computer has not broken down….. So what is my excuse?


Aahhhh, it's been hot? Summer fun?? Politics???? I've been busy making art????? A little of all of the above, but really, no excuses. I've fallen down on the letter writing side of my life as well.

Okay, so we've been experiencing some of the hottest summer weather i have seen here on the bay, yesterday's 'real feel' topped out at 117 F. And no, we do not have A/C on the boat. Up until this past week i would have stoutly insisted that it was not necessary.  Yesterday….. not so much.

Our most adorable ship's cat, Magellan the Magnificent, has earned his third name. May i introduce to you, Captain WaterPaws? Alright, it is kinda cute when he drags his water bowl all over, and i do mean all over the boat; at least in the summer……but, come winter time i feel a little less amused. Literally he will stick one paw after the other into the bowl, moving it about six inches with each paw stroke until it is just the right position, than drink. Until this past week. During the heat wave he has added to his Esther Williams routine by tipping it onto its side once he has the bowl properly situated. 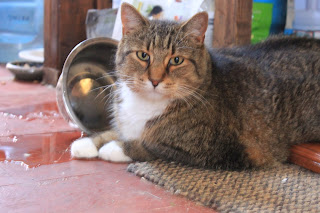 I've been busy on the art front. I started making paper in mid June, but had to take a temporary hiatus, due to the extreme temperatures. I've started adding plant matter to the mix, which all though interesting adds at least two more steps in the process, one of which includes cooking the plant stuff in a caustic water bath for several hours. Just what i want to do when the temps are as high as they have been, and yes, of course i do it outside.


The ICAD 2016 challenge is winding down, just a few more days. I find that i have begun to use the daily routine of making index card art as just a little bit of therapy, a chance to direct some of the anger and hopelessness generated by the current state of American politics. All ICAD collages are hand cut and are 4 x 6".